Silevo is a solar panel technology and manufacturing company that had been planning on bringing around 500 jobs to Buffalo. Silevo had planned to invest $750 million to create a production facility at Riverbend, which is being built by the state to be a state-of-the-art campus to house high-tech and advanced manufacturing companies.

SolarCity, a $6 billion company, confirmed Tuesday it had purchased the smaller Silevo and is now in discussions with New York State to build an initial manufacturing plant at Riverbend. The project would create one of the single largest solar panel production plants in the world and could mean thousands of jobs for Western New York.

Meanwhile, our VLCIA, receiving 1 mil or about $2.5 million of our property taxes a year:

VLCIA did also post that cancellation notice on their facebook page 20 hours ago. The one time I didn’t check in advance and went down there anyway,

I did discover that their July meeting will be in their new office near the hospital they bought last October. I guess those Industrial Parks they’re always bragging about weren’t good enough to locate their own office in. And probably new office space was higher priority than landing a solar manufacturer.

While most of the world fiddles, SolarCity is getting on with the future. As Elon Musk, Peter Rive and Lyndon Rive wrote for SolarCity Blog 17 June 2014, Solar at Scale, 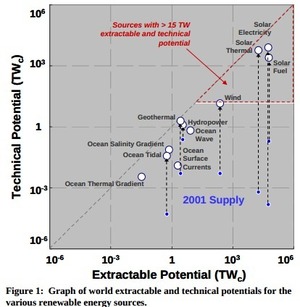 SolarCity was founded to accelerate mass adoption of sustainable energy. The sun, that highly convenient and free fusion reactor in the sky, radiates more energy to the Earth in a few hours than the entire human population consumes from all sources in a year. This means that solar panels, paired with batteries to enable power at night, can produce several orders of magnitude more electricity than is consumed by the entirety of human civilization. A cogent assessment of sustainable energy potential from various sources is described well in this Sandia paper: www.sandia.gov/~jytsao/Solar%20FAQs.pdf.

Even if the solar industry were only to generate 40 percent of the world’s electricity with photovoltaics by 2040, that would mean installing more than 400 GW of solar capacity per year for the next 25 years. We absolutely believe that solar power can and will become the world’s predominant source of energy within our lifetimes, but there are obviously a lot of panels that have to be manufactured and installed in order for that to happen. The plans we are announcing today, while substantial compared to current industry, are small in that context.

Hear that, Southern Company and Georgia Power? Keep up only a few slight changes to slowly ramp up to one gigawatt in a few years, and you’ll end up getting bought by SolarCity, not the other way around. For all our sakes let’s hope one of the storage projects SO CEO Tom Fanning said they were involved in is the SolarCity superbattery project.

And as for that fracked methane pipeline and VLCIA’s support for it:

“We’ll give them permission,” Schruijer said. “Why wouldn’t we?”

Well, maybe because supporting that unnecessary pipeline is enabling diversion of resources from getting on with solar power? Maybe because inviting toxic industries into your county is not a good way to promote economic growth?

I look forward to getting real solar industry here in sunny south Georgia.