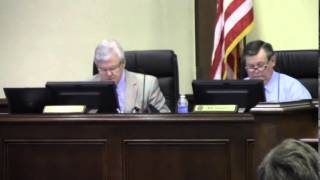 Nevermind the County Engineer said about the Cat Creek Road bridge, “All construction will take place during the months of June and July” (Work Session 2014-03-24), it was closed when Gretchen was headed for this morning’s Work Session, so she had to go by Moody AFB on Bemiss Road, and was a few minutes late. That’s why there’s no video for the first few agenda items, and the videos are handheld. They vote 5:30 PM this evening at the Regular Session, is the same time as the Planning Commission meeting.

The smaller acreage for the return of the Hahira Annexation request is because it no longer has frontage on Hagen Bridge Road, only on GA 122, thus removing the county’s previous grounds for objection (but it’s also on the Planning Commission agenda at 5:30PM today, same time as the Regular Session). There is an appointment to the

Hospital Authority and two reappointments to the shadowy Lowndes County Public Facilities Authority that approves bonds. Two Public Hearings for road abandonments, of Old Statenville Road and of Excess Right of Way on James Road and Riverside Road. All that plus a GEMA Sheltering Memorandum of Agreement and a beer license, plus Poll Manager Recognition.

Here’s the agenda, with links to the videos and a few notes. See videos from the previous Regular Session for context on the Public Hearings and on the James Road Subsidence.