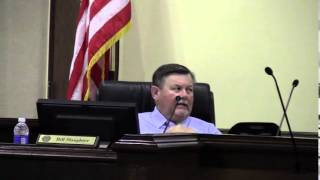 Chairman Bill Slaughter started this morning’s budget session as “the first of our two public meetings on the budget before that budget will be adopted; basically a work session to go over the budget.” Does that mean it is a Public Hearing? If so, why do the county’s front page and calendar link to a blank page for a “Budget Session”, and there’s no Public Notice, even though there were Public Notices for the two road abandonments on the agenda for the Work Session and Regular Session? How can it be a Public Hearing if it’s not announced as such and the public doesn’t know about it? Gretchen says that near the end they clarified that this was not a Public Hearing, and there would be two actual Public Hearings before the budget was adopted, although when is still a mystery.

Here’s a video playlist, followed by links to the individual videos. There are no links to an agenda, because the county didn’t publish an agenda, nor a draft budget.