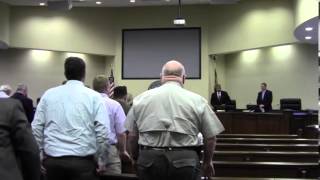 If the County Commission hadn’t privatized garbage collection, Frenchie could have registered his complaint about garbage falling off trucks through the new turnkey government website service once it’s online. No mention of the annexation request by the City of Hahira from the Work Session.

Commissioner Powell noted the three SPLOST VII projects were “a direct reinvestment into the community of those funds”. The road resurfacing of four roads is actually mostly from a GDOT LMIG grant, but the other three, shoulder paving on Val Del Road and Boring Pond Road and a bridge replacement on Cat Creek Road are all from SPLOST VII funds. Plus some trucks for Animal Control and tablets for the Fire Department, an alcohol license, and some alphabet-soup agreements, one of which turned out to be for a grant for a victim advocate position in the Solicitor General’s office.