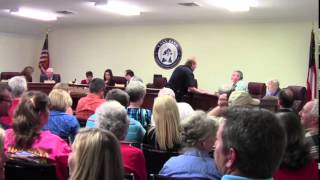 Opponents to the Brookhaven apartment building rezoning packed the room, like they did at the Planning Commission meeting the previous night. The Lake Park City Council tabled it, asking the developers to go talk to the citizens.

The annexation request discussed at length at the 10 March 2014 Lowndes County Commission Work Session was on the agenda for last night’s Planning Commission but was withdrawn. It’s still on this agenda.

And they have Citizens’ Concerns not once but twice, which resulted in several citizens praising the City Council and staff, especially for the Lake Park Rodeo parade.

Here’s a link to the agenda for the 1 April 2014 Lake Park City Council Regular Session, followed by links to the videos in the order they actually discussed things, plus a few notes.