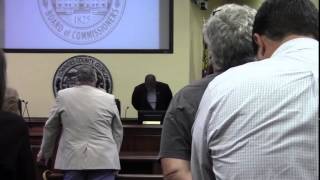 $78,892.56 for an unbid change order for Val Del Road. The Board of Tax Assessors’ appeal to a Board of Equalizations decision to grand PCA an unusual depreciation was approved by the Lowndes County Commission by a rare split decision, 2 to 1. Greg Powell of Langdale Industries appointed to KLVB. And Citizen Noll recommended the Commission pass a resolution or ordinance about the proposed Sabal Trail pipeline.

Three voting Commissioners (Raines was absent and Page vacated his seat) unanimously approved three rezonings with nobody speaking for or against. They granted permission to the Sheriff’s office and to Emergency Management to apply for equipment grants. There was a weather report, and a report on an animal adoption event the previous weekend.

Here’s the agenda, with links to the videos and a few notes. See also the videos of the previous morning’s Work Session.