Like the Sinkhole on US 82 near Tifton August 2012, caused by a broken water main, and since filled in. The other type is much more common: 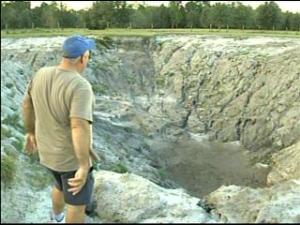 The other type, Dr. Bursik explained, “is a thing that you get in limestone terrains where limestone is near the Earth’s surface.”

The limestone is easily dissolved in water, which creates a hole underground. The surface eventually will not have the support it needs, causing a cave in.

Like the ones in Suwannee County, Florida and points south, including the one that pulled a man from his bed into the ground in Sefner, FL. Also in Albany, GA, and the one that caused Lowndes County to reroute Snake Nation Road. All of these are in the same Floridan Aquifer.

How do you know if you’ve got a sinkhole? 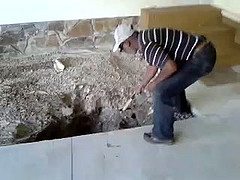 Officials say look for depressions in your yard, shifts in your home, and cracks on the pavement surface.

Like the one under Michael McCormick’s garage in Lowndes County?