So many things the Industrial Authority is doing that they could be promoting! Some of them came out at their 16 April 2013 Board Meeting. Maybe they even took notes about the Georgia Logistics Summit putting all its presentations on its YouTube channel.

In her Marketing Report, Meghan Duke said branded materials were now available and in use. Valdostalowndesprospector.com has new feature for comparison of features by county, city, etc. for any community in the world. Several recent guests, including

Georgia Power South Region, whom VLCIA took on a tour of their industrial parks and Steeda Autosports. VLCIA hosted Board of GA Dept. of Economic Development at Moody AFB. She didn’t say, but GDEcD Board of Directors says:

Georgia Department of Economic Development’s Board of Director’s meeting will be held in February 21st, 2013 at Moody AFB, 1800 Moody Road, Valdosta, GA 31601. Due to security on base you will need to have a government (state, federal, etc.) issued ID, such as a driver’s license, with you before you can enter the base. A background check with need to be ran prior to the meeting day so please contact Carrie Bisig & she will let you know what information the base will need.

VLCIA had a community presentation in Atlanta with 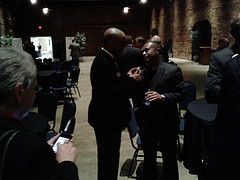 project managers at the end of February, with Mary Gooding, Valdosta Mayor and Manager, Lowndes County Chairman and Manager. I don’t know what that was about, unless she was referring to the Bird Supper 27 February 2013 at The Depot in Atlanta; I saw her and all the people she named there.

It was a great time for our logistics and distribution industries here in Valdosta to go hear from some leaders from the state and from other organizations on best practices.

This Logistics Summit was apparently a big deal, judging by the Governor was a speaker and the companies that presented. And look, they video and post their sessions on their YouTube channel! Maybe VLCIA could take notes about….

All the sessions were recorded and will be posted on our dedicated Youtube Channel for easy viewing and sharing: www.youtube.com/georgialogistics

VLCIA was working on South Georgia Classic, which is all this week. She didn’t say, but it’s 22-28 April 2013, at Kinderlou Forest Golf Club. VLCIA took Steeda to the Go Global reception in Atlanta where they networked with Chinese representatives. She didn’t say, but that was 26 March 2013 at the Woodruff Arts Center in Midtown Atlanta. VLCIA did post a report (undated) on that, Steeda Autosports Attends Go Global Seminar to Discuss International Trade Opportunities, which begins: