The county held a ceremony for departing Lowndes County Planner Jason Davenport. I asked the person sitting in his former seat, Engineering/Planning Technician Molly Stevenson, if she was confirmed yet. She would only say it was confirmed that she was sitting there right then. 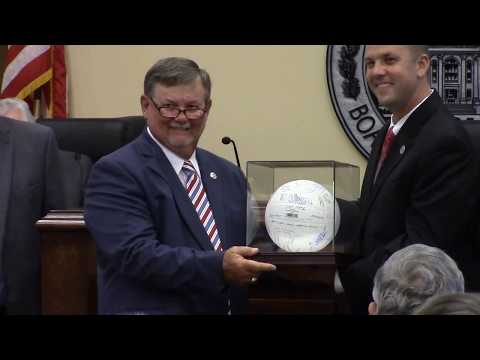 They also had a 911 CALEA Re-Accreditation Presentation and the Chairman recognized Leadership Lowndes.

On the REZ-2018-16 Stovall rezoning, the applicant revealed the reason for the previous restriction when it was rezoned back in 2015. The REZ-2018-15 reconfigururation for two parcels passed with no comments nor questions.

Yes, the County Manager and the Finance Director now get to approve 2.5 times as much in dollar value as they used to.

Below are links to each LAKE video for each item, with a few notes, followed by a LAKE video playlist. See previous post for the agenda and some background, especially on REZ-2015-16. See also the LAKE videos of the previous morning’s Work Session for a new HR hire and the Naylor Boat and other engineering items remaining to be done in SPLOST VII.