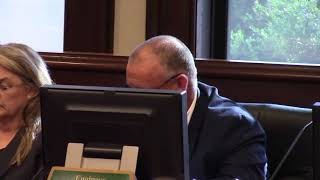 The most interesting items were not on the agenda of the Regular Session two weeks ago of the Lowndes County Commission Work Session. The County Engineer had One more thing: Loch Laurel Bridge Work and Closure 7/16 – 7/23, Commissioner Demarcus Marshall reminded everyone the Georgia hands-free driving law was going into effect, and the Chairman announced swearing in of the newly un-privatized Probation Officers the following morning.

The longest scheduled item at almost 3 minutes was New Consoles For 911 Dispatchers, followed by Contract With Parks And Recreation Authority, because both had questions from Commissioners.

The two grant items added the previous morning, for Accountability Court and DUI Court, sailed through, as did the Francis Lake Lift Station Repair and the LAS Storage Pond Improvements.

Below are links to each LAKE video of each agenda item, with a few notes, At the end of this post there is a LAKE video playlist. See also agenda post for background and the LAKE videos of the previous morning’s Work Session.