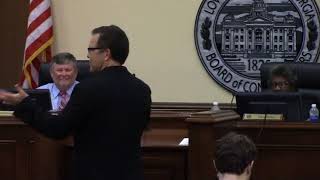 Lengthiest at more than three and a half minutes was the Bill Branham subdivision rezoning, plus a tie for second at 2 minutes 13 seconds between the new Conference Center CEO and the Virdie Mae Lyons Old Clyattvile Road well and septic rezoning, at yesterday morning’s Work Session. Gretchen is off with the LAKE video camera to the voting Regular Session tonight.

Two water items: $17,500 a month, or maybe only $15,000 to replace water meters and registers, and bids for a Portable 65 KW Generator to keep lift stations from leaking.

See also the agenda, and the LAKE videos of the most recent Planning Commission meeting for all three rezoning cases, and that post also has links to videos of most of the previous appearances of the Branham Project, back for at least the third time in four calendar years.