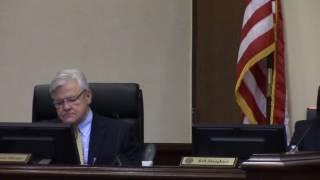 They appointed Ben Copeland to the Hospital Authority. More later on why they seem to be doing it backwards. Nobody spoke in the Public Hearing for abandonment of Excession RoW off Payton Place, so they abandoned it and quit-claimed it to the adjoining landowner. Then they determined to hold a Public Hearing to abandon unopened RoW of Avenue I, although there was an ownership question from Commissioner Clay Griner, which County Engineer Mike Fletcher answered. They approved in this public meeting a list of three elected officals using county-issued credit cards, but they did not reveal to the public who was on the list. The County Manager had no report and there were no citizens wishing to be heard so they adjourned.

Here are links to each LAKE video of the Tuesday 8 November 2016 Regular Session, with a few notes, followed by a video playlist. See also the LAKE videos of the previous morning’s Work Session and the agenda.