Why is a public hearing for VSU bonds being held at a private law firm?

Is there no parking at VSU for the public to hear about this $58,805,000 bond issue? There is free parking at the county palace for which we the people footed around $51 million in bonds.

For that matter, why are bonds for a public university being held by a private LLC? Why are they being issued to that private LLC by the shadowy South Regional Joint Development Authority, to which the Lowndes County Commission just appointed Commissioner Clay Griner this May, even though County Manager Joe Pritchard couldn’t tell Griner when that Authority meets?

Can’t the Lowndes County Commission provide this bond Public Hearing with a public place to meet?

In the Valdosta Daily Times yesterday, October 5th 2016, and not online anywhere I can find it, was this Public Notice. Gretchen scanned it, and I OCRed it and formatted the lists to make it more legible.

YOU ARE HEREBY NOTIFIED that on the 21st day of October 2016 at 10:00 a.m., at the offices of Coleman Talley LLP, 910 North Patterson Street, Valdosta, Georgia 31602, the South Regional Joint Development Authority (the issuer) will hold a public hearing with respect to thep issuance by the Issuer of up to $56,000,000 in aggregate principal amount of its refunding revenue bonds (the Series 2016A Bonds), the proceeds of which are to be used to

The proceeds of the Series 2007 Bonds were used, among other things, to 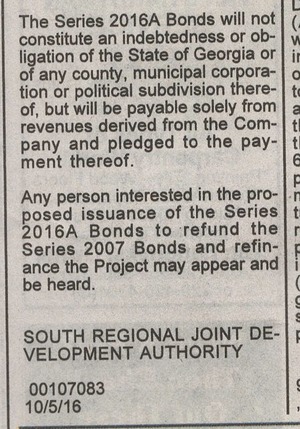 Proceeds of the Series 2016A Bonds will be loaned to and used by VSU Auxiliary Services Real Estate Parking & Health, LLC. a Georgia limited liability company (the Company), the sole member of which is VSU Auxiliary Services Real Estate Foundation. Inc., a Georgia nonprofit corporation, to refund the Series 2007 Bonds. The Company owns and operates the Project for use by the Board of Regents of the University System of Georgia for the benefit of the University.

The Series 2016A Bonds will not constitute an indebtedness or obligation of the State of Georgia or ‘ of any county, municipal corporation or political subdivision thereof, but will be payable solely from revenues derived from the Company and pledged to the payment thereof.

Any person interested in the proposed issuance of the Series 2016A Bonds to refund the Series 2007 Bond: and refinance the Project may appear and be heard.