One case at ZBOA today at 2:30 PM, a variance on parking spaces for Greenleaf Hospital so it can add a new wing. 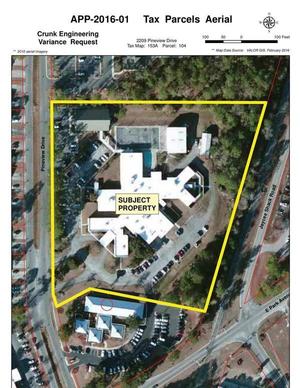 A ZBOA member (Gretchen) provided the packet materials, which are all on the LAKE website.

Here’s the agenda, followed by the summary by city staff.

Valdosta-Lowndes County Zoning Board of Appeals

Crunk Engineering, on behalf of Greenleaf Hospital, is requesting a variance to LDFl Section 222-2 as it pertains to the number of spaces for a hospital. The subject property is zoned Residential Professional (RP) and consists of 6.35 acres located at 2209 Pineview Drive. The subject property contains a 36,968 psychiatric/substance abuse hospital.

The facility is proposing to add a smaller wing addition of about 2149 square feet and a two story bed addition of about 22.671 square feet. bringing the total hospital space up to 61.788 square feet. The facility has a total of 73 beds currently, and 40 beds are proposed to be added. Given that the addition is more than 50% of the existing square footage, the LDFl requires that the entire facility come into compliance with today’s parking regulations. With a total of 113 beds (existing and proposed), that would require a minimum total of 283 parking spaces at 2.5 spaces required per bed. After renovations. there are a proposed 52 parking spaces to be added. bringing the total parking spaces to 159.

In 2012, the facility was evaluated for compliance in regards to zoning and parking. The facility was built in 1984 under prior regulations, and while not complying in terms of use and parking, it was considered legal nonconforming. The applicant, on behalf of the Hospital Authority of Valdosta and Lowndes County. applied for and received a Conditional Use Permit for a psychiatric and substance abuse hospital in Fl»P zoning, as well as receiving variances from the supplemental regulations for hospitals relating to setbacks and the requirement that a hospital be located on an arterial. as well as parking space dimensions. The applicant also was granted an Administrative Variance for relief from the minimum number of parking spaces, allowing a minimum of 110 spaces rather than a minimum of 125 for a (at the time) 50 bed facility.

Upon evaluating the request in 2012 and again now, staff realizes that the facility does not operate as a traditional hospital. Greenleaf allows inpatient treatment for such things as psychological issues as well as substance abuse issues, where the patients may need to stay in the facility overnight to several weeks, depending on the treatment programs. The facility also offers out-patient treatment, such as counseling sessions, where the patients may visit for an hour or two, rather than a night or longer. The closest parking standards to the facility are the traditional hospital standards at 2.5 spaces required per bed; given that Greenleaf is not a traditional hospital facility. but a hybrid of a medical office/clinic/hospital. and that the applicant is adding parking spaces as well as beds, the request meets the intent of the parking requirements of the LDFl. Staff also understands that the applicant will be required to meet other pertinent regulations upon plan submittal — landscaping, stormwater. impervious caps, but that the site plan provided is a proposed site plan only at this time.

Variances are intended to relieve hardship beyond one’s control in instances where strict application of the regulations would be difficult, if not impossible to overcome. In this instance. the regulations pose the hardship as the closest parking requirement to Greenleaf is that of a traditional hospital rather than a hybrid of a medical office/clinic/hospital. Given that. staff recommends approval to allow 159 parking spaces rather than the 283 required.

Staff Recommendation: Find consistent with the Variance Review Criteria and approve the request for a minimum of 159 parking spaces.

The packet materials are all on the LAKE website.