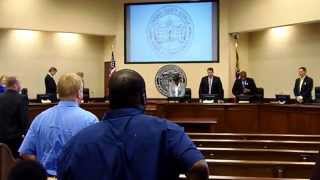 The Hahira Annexation request was actually heard at the Planning Commission meeting that started at the same time. All the incumbents were reappointed to the Hospital Authority and the shadowy Lowndes County Public Facilities Authority. Both the road abandonments were approved, of Old Statenville Road and of Excess Right of Way on James Road and Riverside Road. All that plus a GEMA Sheltering Memorandum of Agreement and a beer license, plus Poll Manager Recognition.

The blank page Budget Session was at 9:30 AM after the Work Session, all the same day as this Regular Session. See also my question about Budget Public Hearings.