Tim DeChristopher, who went to jail for directly opposing gas and oil drilling and is now a student at Harvard Divinity School,

To seriously suggest that any research will solve the climate crisis while we continue to allow the fossil fuel industry to maintain a stranglehold on our democracy is profoundly naive.

Wen Stephenson wrote for the Nation 4 October 2013, Tim DeChristopher: There Is No ‘Neutral’ in the Climate Fight, including DeChristopher’s statement: Drew Faust seeks a position of neutrality in a struggle where the powerful only ask that people like her remain neutral. She says that Harvard’s endowment shouldn’t take a political position, and yet it invests in an industry that spends countless millions on corrupting our political system. In a world of corporate personhood, if she doesn’t want that money to be political, she should put it under her mattress. She has clearly forgotten the words of Paolo Freire: “Washing one’s hands of the conflict between the powerful and powerless means to side with the powerful, not to remain neutral.” Or as Howard Zinn put succinctly, “You can’t be neutral on a moving train.”

“Washing one’s hands of the conflict between the powerful and powerless means to side with the powerful, not to remain neutral.” —Paolo Freire

stranglehold on our democracy is profoundly naive. Faust never admits whether or not she agrees with the basic science of the carbon budget, which is the foundation of the understanding that the current reserves of the fossil fuel industry cannot be burned without condemning us to an unlivable future. If she accepts the science, she should explain how her plan of cooperation will convince the industry to leave those assets in the ground.

Faust’s claim that the university should not divest while it continues to consume fossil fuels obfuscates the fact that divestment is about undermining the political power of the fossil fuel industry. Energy is a market driven not by consumers but by political influence, yet Faust alludes to the worn out old argument that the consumers of fossil fuels don’t have a right to object to the crimes against humanity committed by an industry that uses political leverage to prevent alternatives. As a historian of the Civil War, surely Faust knows that the exact same argument was made to defend slavery, an energy source that was once every bit as vital to our economy as fossil fuels are today.

The students’ call for divestment was a call for help by the young people who will reap the consequences of the climate crisis. The industry committed to ruining our future simply asked Faust to stay out of it. There is no way for someone in a position of influence to not take a side in such a situation. That’s why leadership is no place for a coward. By turning her back on those calling for help, Faust absolutely took a side. I strongly suspect that time will show that she chose the wrong side of history. When our generation writes Drew Faust into the history books, being not as bad as Larry Summers will not suffice as a position of honor. Harvard needs leaders better able to see beyond their own time, and the students who will continue to push for divestment are a great example.

As Tim DeChristopher said when he was sentenced,

Since fossil fuels are a limited resources, whoever controls access 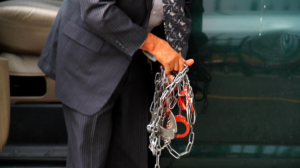 to that resource in the beginning gets to set all the terms. They set the terms for their workers, for the local communities, and apparently even for the regulatory agencies. A renewable energy economy is a threat to that model. Since no one can control access to the sun or the wind, the wealth is more likely to flow to whoever does the work of harnessing that energy, and therefore to create a more distributed economic system, which leads to a more distributed political system. It threatens the profits of the handful of corporations for whom the current system works, but our question is which segment of the public are you tasked with protecting. I am here today because I have chosen to protect the people locked out of the system over the profits of the corporations running the system. I say this not because I want your mercy, but because I want you to join me.

Join him, Harvard. Join him, VSU.