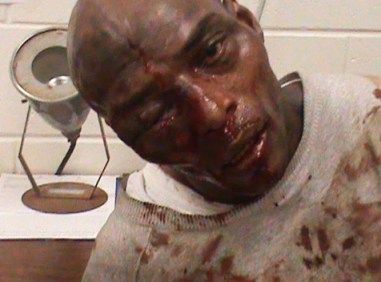 The deplorable beatings you’re witnessing occurred on New Year’s Eve, just before midnight, on Dec. 31, 2010. It’s taken two years and nearly eight months for the Georgia Bureau of Investigation to release this video. A very persistent family member of one of the victims finally persuaded them to give it to her, and Rev. Kenneth Glasgow, a strong advocate for justice for prisoners, posted it to YouTube for the world to see.

The family member who retrieved the video describes it as “Georgia inmates being beaten with a hammer-like object while handcuffed,” and she adds: “The Georgia Department of Corrections denies this happened but were caught on tape. The officer responsible was never arrested or reprimanded. The district attorney had the video and never sought charges.

“The family is demanding justice for this barbaric, inhumane act. We ask everyone to help by contacting District Attorney Tom Durden at (912) 876-4151.” Kelvin Stevenson, Georgia prisoner beaten with hammer by guards 123110 This photo of Kelvin Stevenson immediately after being beaten by guards with a hammer-like instrument on Dec. 31, 2010, is seen for the first time in the video of the beating finally released this month. “Within the entire GBI (Georgia Bureau of Investigation) file,” says Rev. Glasgow, “no GBI investigative agent or prison official identifies the guard on the video who is clearly beating non-resisting Miguel Jackson and Kelvin Stevenson with the hammer-like object.

“If you look closely, you will see a very large man lying on top of Kelvin Stevenson as the other guard batters his head with the hammer. Eye witnesses state that Stevenson was also handcuffed at the time.

And remember, private prisons such as those run by CCA are even less accountable.

It’s time to end the failed War on Drugs and ramp down the seven-fold swelled prison system in the U.S.