Japan’s TEPCO is deploying the offshore wind solution we need in Georgia. It’s big baseload, Georgia Power and Southern Company, just like you like!

Martin Foster write for Wind Power Monthly 25 June 2013, Work starts on Fukushima floating project: JAPAN: Installation of wind turbines in the testing phase of the biggest offshore floating project to date will finally get under way this week, 20 kilometres off the coast of Fukushima. 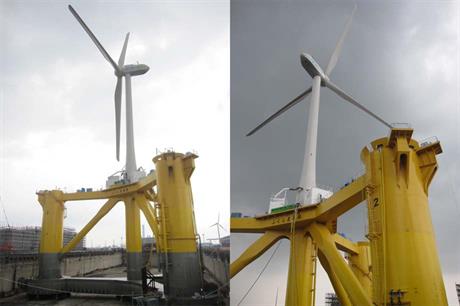 Two 2MW downwind floating turbines are scheduled to be towed from shipyards belonging to Mitsui Engineering and Shipbuilding in Chiba prefecture to Onahama port on 28 June, according to a new schedule released by Takeshi Ishihara a civil engineering professor at the University of Tokyo and technical adviser to the project.

These are the floating wind farms designed to survive tsunamis and typhoons. A typhoon is the Pacific Ocean version of a hurricane. How about we tether some of these to the continental shelf off the coast of Georgia? Then they plus solar onshore could replace Plants Vogtle and Hatch the same way these wind turbines plus solar inland are replacing Fukushima Dai-ichi.

The massive floating wind farm project, which is being developed by an 11-entity consortium lead by Marubeni Corporation, may eventually see 132 floating turbines come on line. It has been named Fukushima Mirai, literally the future of Fukushima, and has been planned as part of post-nuclear disaster recovery efforts in the area.

This is the sort of massive baseload project a great big company like the Southern Company and its biggest part Georgia Power likes. Time to get on board for offshore wind, Tom Fanning and Paul Bowers!