There’s no press release about this on the Lowndes County website. Buried in their calendar there is this blurb:

Who is the Committee for the Preservation of the Courthouse?

On 24 April 2012 the Commission appointed [mumble] to that Committee. According to the minutes it was “Mr. Mike Dover”, presumably J. Michael (Mike) Dover, Esq. of the Langdale Company, although curiously his writeup there doesn’t mention the Courthouse Preservation Committee, while it does mention numerous other committees and boards he’s on. Here’s his law firm writeup, for Dover Miller Stone & Karras, P.C.. Why isn’t this Committee publicised by the County?

Why does the Lowndes County government throw away good PR like this? County Clerk Paige Dukes did get on WALB 14 December 2012 about the Annex demolition, 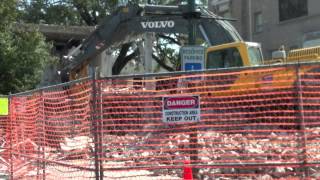 and a Michael McKinley posted a video of the demolition in progress, but I don’t find anything in the news about this Earth Day tree planting event.