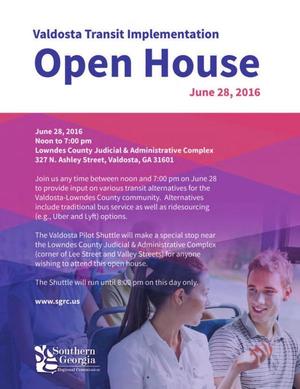 I am pleased to let you know that the Valdosta Urbanized Area Transit Implementation Study is well under development and it is time to share the draft recommendations with you and with the community. With your help, we reached over 500 members of the community through our online survey this Spring! The input has been very helpful in the development of the study and in fine-tuning our Pilot Shuttle Program which just received additional funding to operate through September of this year.

We will hold a Transit Implementation Study Open House from noon to 7pm on Tuesday, June 28 at the Lowndes County Judicial and Administrative Complex, 327 N. Ashley Street, Valdosta, GA 31601. We look forward to presenting the draft recommendations and have planned for a special shuttle stop on the day of the meeting to accommodate transit riders interested in participating in the meeting! I would like to request your assistance in extending the meeting notification to the community. 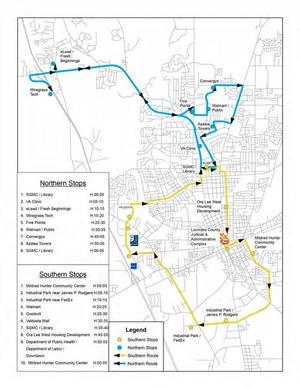 Attached were a a PDF flyer (images below) and a press release in Word (also inline below). 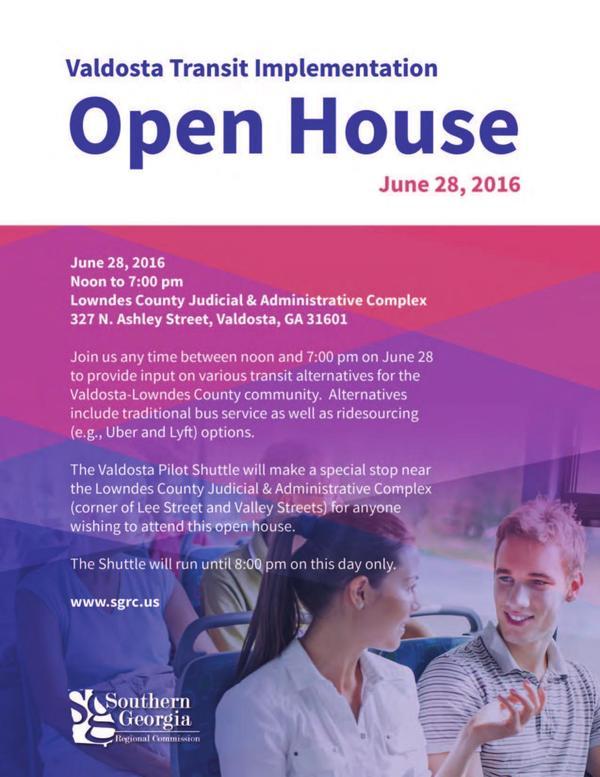 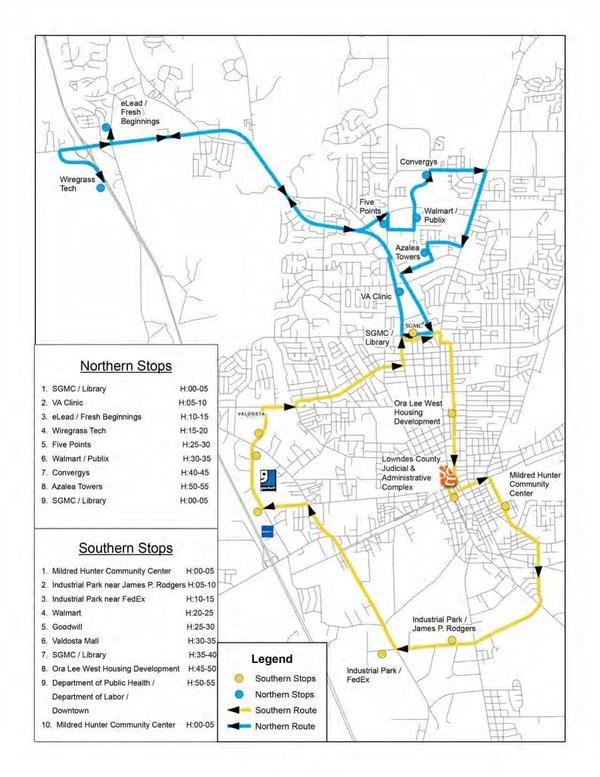 Valdosta– The Valdosta-Lowndes County Metropolitan Planning Organization (VLMPO) is exploring options for implementation of public transit service in the Valdosta urbanized area.  The local community is invited to attend an Open House on Tuesday, June 28 from noon to 7pm at the Lowndes County Judicial and Administrative Complex, 327 N. Ashley Street, Valdosta, GA 31601.

The Open House will provide an opportunity for the community to review study findings, gain information on the public transportation alternatives under consideration, and provide input to members of the transit implementation study team throughout the day.

The study identifies innovative and cost effective ways to implement public transit in the community. Alternatives include traditional bus service as well as transportation rideshare options like Uber and Lyft.

As a part of the study, a community survey was conducted during the Spring of 2016. Of the 512 survey participants, approximately 75% feel there is definitely a need for public transit service in the Valdosta area.

Do you feel there is a need for public transit service in the Valdosta Area?

The Pilot Shuttle Program, which began in October of last year, has seen a steady increase in ridership over the past six months. The Georgia Department of Human Services (DHS) will continue the Valdosta Pilot Shuttle Program through September 30, 2016. The Southern Georgia Regional Commission will likely propose a modification to the current route based on ridership statistics, survey feedback and timeliness of the route. Continuation beyond September will depend on additional funding from DHS or other sources.

“We are very encouraged by the findings of the Pilot Shuttle Program and the transit implementation study. We want to share this information with the community during an Open House on June 28,” said SGRC Transportation Director and study Project Manager, Corey Hull. “To ensure citizens throughout the community are able to attend the Open House, we have arranged a special shuttle stop at the Judicial and Administrative Complex during the meeting. We hope the public will stop in and learn more about the future of transit in Valdosta.”

The Valdosta Pilot Shuttle will make a special stop near the Lowndes County Judicial and Administrative Complex at the corner of Lee Street and Valley Street until 8 pm on Tuesday, June 28.

A flyer advertising the Open House and a map of the route scheduled for June 28 is attached and is available at http://www.sgrc.us/public-transit.html.