Who is on the Tourism Authority Board, and why do they have such rapid changeover in executive directors? 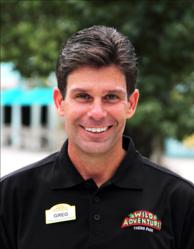 and Greg Charbeneau apparently to replace Linda Jenson (who had been appointed to fill a vacancy for ? Montgomery).

County Manager Joe Pritchard said at the Tuesday Regular Session that Greg Charbeneau is a Vice President at Wild Adventures. Here’s video of that session:

According to Wild Adventures’ own press release of 29 July 2011 and the VDT 14 August 2011, Greg Charbeneau is also their general manager.

We learned a little more at the Monday Work Session, but not much. Here’s video:

VLCCCTA’s own webpage has no indication that such a board even exists, much less who’s on it. Lowndes County’s web pages say nothing about it that I can find; instead they have their own tourism web page that doesn’t even name the Tourism Authority, although the county’s link from Rainwater Conference Center does lead to the Tourism Authority’s web page. The City of Valdosta’s web page on boards and authorities says:

The primary purpose of the Valdosta-Lowndes County Conference Center and Tourism Authority is to give direction and leadership towards the achievement of the authority’s mission, goals and objectives. Contact: Michael Jetter, Interim Executive Director at 229-245-0513 or mjetter@valdostatourism.com.

Even the VDT has taken VLCCCTA to task for violation of open meetings laws; Brittany D. McClure wrote 24 November 2011,

While various issues were being discussed, numerous private conversations were held throughout the course of the meeting. As Tourism Authority meetings are an open meeting, all issues, concerns and discussion should be discussed in an open manner as required by Georgia Sunshine Laws. There were several instances that took place throughout the meeting that violated the Open and Public Meetings Law.

Oh, and it’s not even clear who is the Interim Executive Director:

“This is the third time I have been the Interim Director,” said Culbreth.

Yet the City’s web page still says Jetter. Is he back? Or is Valdosta as unable as the rest of us to keep up with the less than transparent doings at the Tourism Authority?

And the board, whoever they are, apparently wants to outsource everything to an even less transparent unnamed management company:

According to Culbreth, the board has expressed interest in pursuing a management company as opposed to pursuing a search for a single Executive Director.

Let’s see if we can pull together a partial list of Tourism Authority Board members from VDT articles and the LCC meetings:

Is that all of them?

Why do we the taxpayers have to ferret out such information?